Welcome to the start of Week 4 of Mesa Vista! 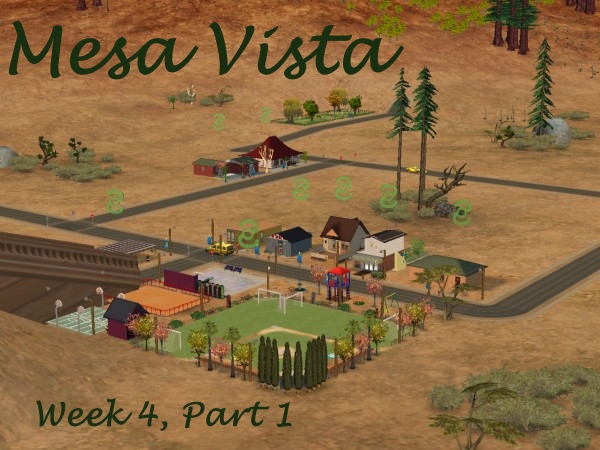 To recap:
Zach Adams, the founder, and his Business Tycoon wife Nikki and three boys (plus one in the oven) are ready for a bigger house.
Diane and Stephan Shin had a baby boy, Stan, after the first baby was lost in a game crash. Stephan also found a job in Business.
Kerie Ng was working her way up Medical and her son Noah wasn't happy that his Uncle Brandon (London) moved into his own place.
Marie Sims won a contest with her famous berry pie and then opened up a little bakery.
Neil Cameron passed away, leaving Madeleine Mazza to raise their infant daughter Nellie.
Carl Homeless did a little better last week, though that isn't saying much.
Nemo and Ciel Outside and their four kids: Nemo was almost a City Planner, and their two oldest girls were about to become the first college students from MV. Ciel also snagged a job in Business as she waits for her kids to fulfill her dream of having 3 College Grads.
So, that's where we left off in a nutshell! Now, on to Week 4...
( Collapse )
Collapse